From the KPJAYI, it is recommended to return to the practice of ashtanga yoga after 3 months of vaginal delivery and 6 months after a cesarean section. First of all, this should be a personal decision based on the intuition and needs of each woman’s body, mind and the possibilities of each individual family. This is considered a recommendation because in regard to pregnancy, childbirth, and motherhood in general, there is no right or wrong way to do things, but the personal path of each unique woman.

I think that if I have to choose only one piece of advice, it would be to be able to give the body time to recover without the pressure of having to “go back to what it was before”. The postpartum period is something very special, in several ways. Something we all share is the exhaustion, it is a constant to have few and irregular hours of sleep and it is a situation where it is possible to get injured. The most important thing is to allow the body to heal internally since the body took 9 months to change and now not only the bones moved but the organs and muscles as well. It is very difficult to evaluate the internal part by ourselves at the present time. Everything has to find its place again, smoothly and gradually. Patience and compassion for ourselves are great teachings in this period, something we can apply outside the mat, with our children and family. Too much activity too soon may not cause an immediate problem but may later lead to pain. The reason why several women feel low back pain in the postpartum is because the muscles that support the uterus and the pelvic floor are still weak. As in pregnancy, the ligaments and joints are softer due to the effect of prolactin in lactation, therefore the body will not return to normal until a few months after stopping with it.

It’s common to develop diastasis recti during pregnancy where the layers of muscles that cover the abdomen separate creating a space in the abdominal wall weakening its function in supporting the back. If left untreated, it can cause abdominal, pelvic, and lumbar pain. Resting the body immediately after delivery so that the internal organs recover properly helps in this regard. Avoiding starting too early also gives the muscles time to rejoin. The focus on bandhas has to be sharper. Moola bandha for the pelvic floor (similar to the recommendation of Kegel exercises) and uddhyana bandha for the abdominal and lower back (similar to the hypopressive abdominals that are recommended for diastasis recti). Avoid mostly navasana (do only one leg stretched at a time), deep backbends, uttana padasana.

It is advisable to try to focus the practice on integrating it naturally into the daily life and to be able to reconnect with a regular discipline, something that orders and anchors us. An intimate space of encounter with the new body and mind of motherhood. For me personally, it’s not until I stop breastfeeding that discipline doesn’t suit me at all. I feel pushed away from anything that requires more from me that I’m already giving. I feel more attracted to nourishing attitudes/activities that tend to fill my plate rather than leaving me depleted with nothing left to give. After delivery, the hormonal changes are very intense and what first arises, usually, are those cravings to identify with who we were; and returning to practice usually represents that place where you can be the same again. But slowly, practice will also show us that nothing will never be the same.

Personally, I felt my body became a stronger one. I discovered an inner strength, more subtle. Practice with pain, start over from scratch, it forces you to focus only on the basics: breathing and bandhas. There is not too much place for something else or a lot of time to play around. The best we can do to recover the connection with our body is to focus on the breathing. We can do that even 10 days after giving birth. Bandhas and breathing.

We can call ourselves very lucky to have the opportunity to revisit the foundations, to be beginners again, to look at ourselves with fresh new eyes. To review our practice and to what we call Practice. What we practice for.

Some ideas to keep in mind:

“After both births I did get the practice back, and it was actually better and stronger than it had been prior to having babies. When you mentally let things go and when you physically lose connection to the bandhas, your body changes forever. All you can do is be in the present and begin again step by step, breath by breath. Starting over was my biggest teacher. The practice flourished as I flourished as a mother.

The practice is the practice, no matter how it looks like. Finding time to do it after having children is probably the greatest challenge. But every little piece of time dedicated to breathing, moving, sweating brought me a deep sense of humility and appreciation. Yoga is really about being ‘awake’ and using what we have to work with -and what we have is perfect.”

Author’s Note: This text is based on my own experience going through 2 pregnancies and practice and from the book Yoga Sadhana for Mothers by Sharmila Desai and Anna Wise. 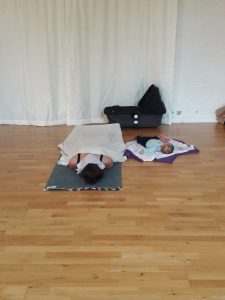 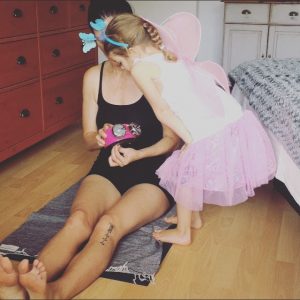 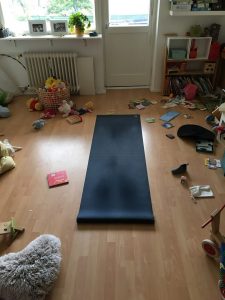 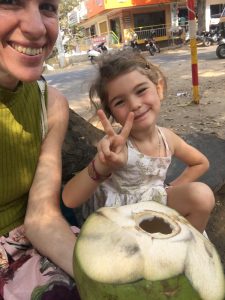 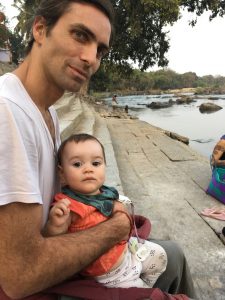